The Power Electronics community gathered in Riga, Latvia, from 17 to 21 September 2018, to exchange views on research progresses and technological developments in the various topics described hereunder.

On Monday 17 September a number of tutorials were organised and several technical visits took place on Friday 21 September.

The 20th Conference on Power Electronics and Applications (and Exhibition), EPE’18 ECCE (Energy Conversion Congress and Expo) Europe was co-sponsored by the EPE Association and IEEE PELS. It took place at the Kipsala International Exhibition Centre at the Riga Technical University Campus. 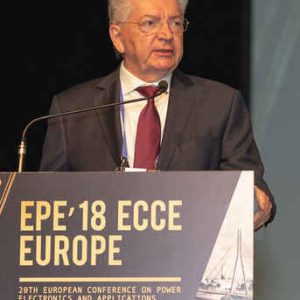 Electrical energy generation and supply to users is on transition to distributed generation from traditional to renewable energy sources and development of Smart grids on “macro”, “micro” and “nano” levels. Very fast research and development of smart DC grids is highly challenging and power electronics is the driving force of those new technologies. Power electronics in mechatronic and adaptronic systems, industrial robotics and wide range health care and biorobots with artificial intelligence are topics for further research. Also, increasing the efficiency of power supplies reduces electrical energy consumption and may be counted as another way to reach that goal. Power electronics is also becoming crucial in electric power systems, as it includes various types of energy storage technologies. In response to all these challenges, novel topologies, control structures and power components are being introduced to improve performance of power electronics systems. Especially, new wide bandgap materials (SiC & GaN) are a serious chance for a big step forward in a broad range of applications. A wide spectrum of topics will be addressed during the largest European conference in Power Electronics – EPE’18 ECCE Europe. Researchers, application engineers and experts from academia and industry will meet to discuss and exchange ideas.

The following tutorials were organised on Monday 17 September 2018, prior to the conference. They took place at the Faculty of Power and Electrical Engineering of Riga Technical University:

The following keynotes were given during EPE’18 ECCE Europe:

Keynote 2: Emergency of the DC microgrids in electro-intensive applications

Nowadays the increasing of the cost of the energy (electricity, oil, fuel, …) and his availability (e.g. limited available power in nationals grids) conduct the electro-intensive applications owners to look to a drastically improvement of energy efficiency. One investigated option is the use of DC electrical distribution architectures in order to avoid unnecessary power losses. This was allowable due to the development of the power electronics bringing higher efficiency, higher reliability, lower cost and easily maintenance. The keynote will discuss the investigations done for the DC microgrids in a marine application (onboard vessels) as well for the large data centers.

Charging of electric vehicles, in particular fast charging, in cities is major challenge for the existing AC infrastructure. Even charging multiple vehicles overnight quickly overloads the low-voltage distribution grid. In addition, as the automotive industry launches the proposition that fast charging up to 350 kW is a customer requirement, offering fast-charging stations could become a business opportunity. In this presentation, solid state solutions are presented that build on existing AC infrastructure to accommodate high-power charging.

Currently, electric power systems start to shift toward more environment friendly energy productions to limit the climate change and reduce pollutions. The major focus is the variability of the new energy sources, and reliability of the supply. The challenge for the future electric power grids is how to integrate a widespread addition of renewable sources with intermittent nature in both transmission and distribution grids without compromising reliability, stability and cost of the service to the consumers. A system that can handle a generation mix with a high percentage of renewables will become a necessity which requires solutions as increased transmission capacity through AC and DC solutions, and/or a larger energy storage capacity in the grids.

Grid-connected converter technologies have had a truly revolutionary impact on the way that electrical energy is delivered to consumers all over the world, and has become an indispensable part of the electric power systems today. It is anticipated that by 2030 all electric power generated utilizes power electronics somewhere between the point of generation and its end. Power electronics contribute in many ways to more efficient use of energy, which allows for energy savings, which in turn leads to reduced environmental impact. The R&D in this field aims at optimizing complex decisions and solutions that are required for the design of these power electronic converters to deliver innovation for the future conversion, processing, transmission, distribution as well as storage of energy across a wide range of applications.

This presentation will start with an overview of the main drivers for the future grids. Then the historical, the present and the future power grid will be discussed including the developments of power electronics in grid-connected applications such as HVDC and FACTS together with more futuristic applications. Moreover, the key design parameters of power electronics and its functionalities will be described in the context of megatrends and grand challenges of the electric power system evolution. Finally, the current state of the art and topics for the future research will be presented.

The energy transition objectives can’t be achieved without a massive integration of renewable energy sources into power grids. On one hand, this integration requires to reinforce large scale transmission system capacity, and interconnections between countries, in order to create an electricity market and the conditions for renewable energy trading. On another hand, conventional generation connected to the grid through synchronous generators is replaced by renewable generation which connected to the grid through power-electronics converters.

This trend leads to three major changes for the grid:

The presentation will cover the following aspects of power grid controls:

Starting from the physics of the system, a selection of key control challenges will be explained, and some major evolutions in power grid control will be put into perspective.

The following Technical Visits were organised in the frame of EPE’18 ECCE Europe:

Currently, CHPP-2 is the most efficient and up-to-date combined-cycle heat and power plant in the Baltics. Two combined-cycle gas turbine (CCGT) units and five water boilers are operated at CHPP-2. With the commissioning of the second power unit, the electrical capacity of CHPP-2 in cogeneration mode reaches 832 MW, while the thermal energy capacity of the two power units is 544 MW in cogeneration mode. The electrical capacity in condensation mode amounts to 881 MW. Meanwhile, the total thermal energy capacity of CHPP-2, including water boilers, is 1,124 MW. The back-up fuel reserves (diesel) is intended for five water boilers and two house-service steam boilers.

In 2014-2017, a reconstruction project for the auxiliary equipment part was implemented at Riga CHPP-2, which included the upgrading of the heating network circulation system by installing new circulating pumps to ensure the quality and economical supply of thermal energy on the right bank of Riga. The project involved modernisation of the power supply system for auxiliary equipment, installing several high voltage frequency converters with a nominal capacity of 2,750 kWel each in order to ensure the effective operation of the heating network circulating pumps, as well as improving the hydraulic system and increasing the level of automation. The reconstruction of the system has resulted in a reduction in the power consumption for pumping the water in the heating networks of up to 50%. In order to ensure auxiliary power consumption, solar panels with a total capacity of 4.7 kW have been installed on the roof of the first power unit of CHPP-2.

Technical Visit 2: The Plavinas HPP, the largest hydropower plant in the Baltics and one of the largest in the European Union

Latvenergo Group generates most of its electricity at the three largest HPPs in the country: Kegums HPP, Plavinas HPP (located 81 km from city centre) and Riga HPP, which together form the Daugava HPP cascade and ensure environmentally friendly electricity generation. They operate on water – a renewable energy source. Although the capacity of the Daugava HPPs is high, their ability to generate electricity depends on the water inflow in the Daugava River. The Daugava HPPs operate at full capacity during the spring flooding season, which lasts for about one to two months annually. Water inflow in the Daugava River during this time may exceed water inflow during low water periods, which occur mainly in summer, more than 10 times. During the spring flooding, Latvenergo Group is able to cover the entire customer demand for electricity. The Daugava HPPs provide for the possibility to accumulate water and generate electricity when the demand and prices on the exchange increase.

Plavinas HPP plays an essential role in the power system of Latvia. With ten hydropower units featuring a total capacity of 894 MW, this is the largest hydropower plant in the Baltics and one of the largest in the European Union. The plant was launched in 1968. This building is unique in its own way: in construction of the HPP, it was shown for the first time in practice that it was possible to build a medium-head hydropower plant on soft ground. The plant building was constructed across the Daugava River’s old valley floor, filled with soft moraine sediments with a thickness of more than 130 m, while the water spillway with 10 gates is located above the power plant building. The gates are lifted using two heavy duty gantry cranes (2x210t).

In 2017, Plavinas HPP generated about 2,434 GWh of electricity, which is 57% of the total electricity output by the Daugava HPPs.

A CITY WITHIN A CITY is a modern centre of engineering sciences and an area of excellent research. Study process in the laboratories of RTU proceeds in close collaboration with companies ensuring that students are involved in the development of innovative products and new technologies.

You will visit the Faculty of Power and Electrical Engineering – the greenest faculty of the University Campus. Climb the roof to see the only wind generator located on the roof in Riga city and sun batteries that supply energy for the Campus.

In the Faculty of Civil Engineering, you will have the opportunity to visit the Advanced Composites Testing Laboratory and see the process of prototyping/testing and non-destructive evaluation of structural components of materials. The laboratory is the only one in Latvia working in close collaboration with NASA.

When visiting Water Research Laboratory − the leading research laboratory in Baltics, you will see the equipment used in bioenergy research as well as the prototypes and pilot equipment for water security research.

The tour will end with the visit to the RTU Design Factory − an innovation centre where students, researchers and companies work together.

The following companies and institutions exhibited at EPE’18 ECCE Europe:

To access the proceedings of EPE’18 ECCE Europe (and other EPE & EPE ECCE Europe-Conferences), join EPE Association and/or log in here: 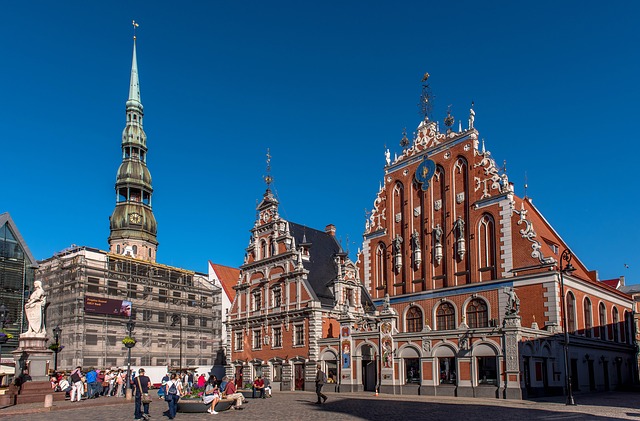